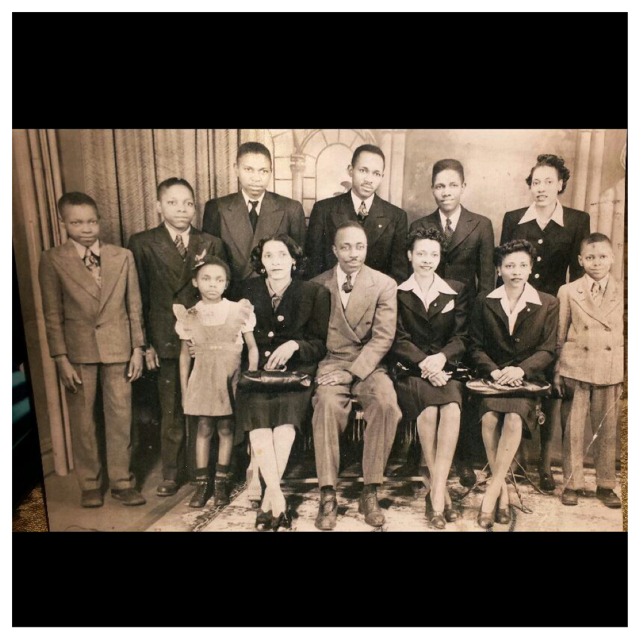 Many understand “The American Dream” as having the white picket fence. A home, two children, a dog and spouse. The successful and/or stable career, financial security, owning a piece of land and later passing it down to the children, has been the definition.

In 1931, author James Truslow Adams defined “The American Dream” as “life should be better and richer and fuller for everyone, with opportunity for each according to ability or achievement, regardless of social class or circumstances of birth.” Translation, if you came to America or even are American- if you work hard, you can find a job in order to control your destiny to achieve the ideal life you want in the land of the free.

Brian Barker, 37 resides in Greater Grand Crossing with his wife of 2 years, 6 month old son Bryson and owns a 4,000 square foot home. He’s currently a professor at DePaul University where he teaches hospitality and management. On paper he’s living “The American Dream”, he’s not quick to jump on the bandwagon of saying he’s living “The Dream” but does feel he is doing well.

The successful career, the spouse, the nice home and the family are personal success, also known as window dressing, states Mark Harris. Harris is an Englewood native who currently resides in a condo in Hyde Park with his wife of 2 years.  He also happens to be a successful film director.  Several of his films including “Black Coffee and My First Love” can currently be seen on TV-One, B.E.T, Centric and to date, he’s produced several films that are either on TV or showing on Netflix. When mentioning his accolades, Harris adds there is still a concern for blacks. The Black Community and improving the lives of black people is something he cannot overlook.

Harris believes he can equally achieve the success of his white counterparts in film, but also feels by telling blacks that if he can make it they can too is a lie. “I know by telling black people that, it’s like saying this world is not designed to keep us in a certain position or this system is not designed to suffocate us.”  You’re leading them to believe that there are not things set in place to work against them. Harris adds that through unity we can all do it because unity is more important than looking at personal or individual success.

We saw the “The American Dream” on The Partridge Family, Leave It To Beaver, Father Knows Best and a host of shows that articulated what this “Dream” looked like post World War II. For many Americans, the idea of inclusiveness has been measured by the indicators of a house, a white picket fence, a dog and a family anchored by a man and a woman role in maintaining the house and the child role in growing. In reality there may have been a dream for some Americans, but there are others who have had to work harder to get ahead in hopes of this “Dream” becoming a reality just because of their race. “At the same time while we saw images of white families living the American Dream, we saw blacks struggling in Good Times, Sanford and Son, Julia and various shows that showed the black plight to achieve that hope. What it said for blacks was an “American Nightmare”. A nightmare that had it’s beginning for a group of people kidnapped from Africa and subjugated through institutional slavery,” said Pastor Kevin Andre Brooks.

Pastor Kevin Andre Brooks sees the evidence of African Americans accomplishing “The American Dream” (or let’s call it Black Excellence).  Greater Saint John AME Church is home to many affluent blacks who were doctors, lawyers, engineers and politicians who too were homeowners in the 1920’s, 1930’s, 1940’s and 1950. Many of which are the off springs who are also living “The American Dream” and currently make-up the congregation. Greater Saint John is the oldest African American church located in Chicago’s Englewood community established in 1887.

Brooks adds, it was not until shows like The Jefferson’s, The Huxtables and Family Matters that blacks started to see themselves as inclusive members in the idea of “The American Dream”.

Whose Is Allowed To Have This Dream?

The American Dreams for Blacks in this society has often been highlighted by what many see in the media, i.e. struggling families, single parent homes and impoverished communities. The fact of the matter is that blacks were much more successful in manifesting “The Dream” despite the American realities.  Black Wall Street was a major example of the African American fulfilling “The American Dream” during the early 1900’s when Tulsa, Oklahoma had over 600 black booming businesses and many affluent black communities. This type of Black Excellence was echoed around the country which prompted the shared prosperity, adds Pastor Brooks. It exemplified, that blacks too are American and can climb the economic ladder. Yet this became a dream deferred or possibly “The American Nightmare” when in June 1921, envious whites bombed the area and killed some 3,000 blacks.

Homeownership plays a major role in defining “The American Dream”. The next best thing was putting down stake in a community by owning a piece of property you worked hard for and a place you could call your own. In the classic novel “A Raisin In The Sun” by Lorraine Hansberry the world was given a glimpse of the reality for blacks in regard to real estate discrimination. Hansberry’s book was based on her family’s story in which she detailed the policies and practices used against blacks to prohibit them from accomplishing “The American Dream” i.e. homeownership.  Such polices included restrictive covenants – which was legal at the time prohibiting black buyers from purchasing homes in an all-white community.

Hansberry’s story was similar for many blacks who faced the struggle in achieving this “American Dream” and was told by way of polices like “redlining” and “restrictive covenants” which in essence stopped blacks from purchasing property in white communities. That restriction led to blacks not being able to readily take part in “The American Dream”.

Many families like my own grandparents still pushed through such redlining practices in 1960’s and fought to purchase in predominately white neighborhoods like Chicago’s Englewood community in the 1950’s and early 1960’s.

There are a lot of mindsets, challenges and variations of what this “American Dream” meant from generation to generation. “I will always be a black man in America,” explains Harris. No matter how successful African Americans are on paper or even in their respective careers, until the community as a whole is operating better; to believe in that dream is a challenge.

While each men expressed his sentiments about living the “The American Dream or The American Nightmare”, collectively they perceived that their communities would have to be thriving in order to really look at themselves as living out that dream. They felt that as a whole there would need to be systematic change, improvement of the quality of life for African Americans and thriving communities in order for them to bask in the glory of living “The American Dream.”

Achievement of “The American Dream” has been proven by the noted success of our ancestors (who built America) who had much more to face and overcome.  If they could do it, then so can we.  However, a small part in not achieving “The American Dream” may sometimes be due in part to one’s own personal and/or bad choices in life.  These choices play a pivotal role in how far one can, or cannot, go to make “The American Dream” a reality.

Institutionally, blacks have not been on a level playing field where we did not have the boots or boot straps to pull ourselves up.  This coupled with bad choices really places the odds against us.

So it becomes imperative that we are careful in the choices and decisions we make.  There is not much room for error, i.e. no petty theft, no child-hood pranks, no detrimental FB postings.  The list is endless, yet we are up for the challenge and clear that Black Excellence is the goal to which we strive.